Student entrepreneurs from the University of Nottingham work with local brewing companies to upcycle leftover donated loaves into a range of tasty craft ales to fight child food poverty.

Every day, a staggering one million unsold loaves of bread are thrown away in the UK, while an estimated 38 per cent of children in Nottingham are living in poverty. Two University of Nottingham students, Hamish Barguss-Smith and Andrei Smirnov, created the Bread Brew’d project to help.

Using leftover loaves donated by supermarkets, bakeries and local businesses, they developed their first beer, Bakers Pale Ale, in collaboration with the Magpie Brewery, a company which is strongly committed to sustainability. The beer is available in various pubs around Nottingham but also in Derby, Newstead and Kirkby.

The profits from the Bread Brew’d project will be ploughed into an initiative run by Foodprint to support school breakfast clubs in Nottingham. Andrei and Hamish were previously involved in Foodprint, Nottingham’s first social supermarket. Based in Sneinton, Foodprint takes surplus food which would otherwise go to waste from supermarkets and sells it at a greatly reduced price, giving people access to affordable, nutritious food. 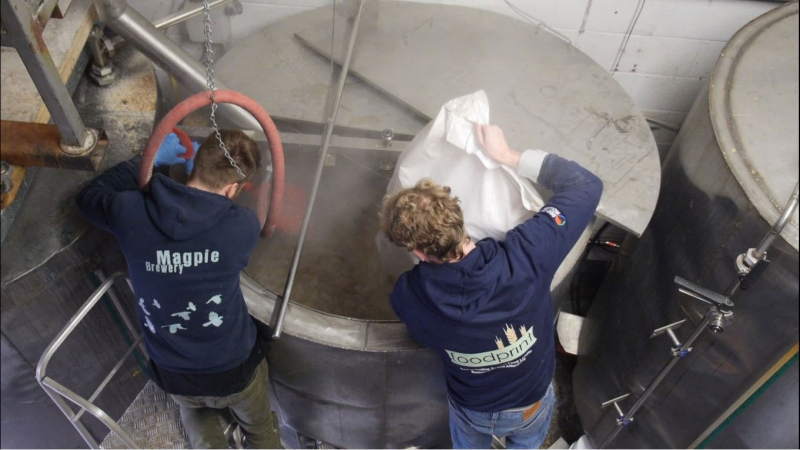 Founder Hamish said: “We believe the paradox of food poverty and food waste - scarcity with abundance - should not exist. We wanted to create a product with both environmental and social impact, putting a positive spin on the industry."

Andrei and Hamish, together with Sales Manager James Cox are part of the not-for-profit, student-led organisation Enactus Nottingham, based at the university, which works to transform the lives of people in need through the power of business. Earlier this year, Enactus Nottingham were crowned UK champions and represented Enactus UK at the World Cup competition in Silicon Valley.

“We believe this issue lies at the heart of social mobility – children who don’t have enough to eat find it difficult to concentrate in the classroom, which can hold them back in their studies and prevent them from fulfilling their true potential.”